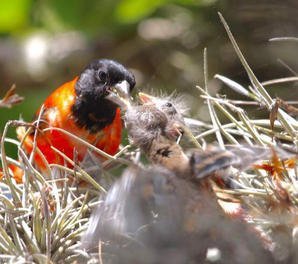 After more than five years and hundreds of hours in the field, Jhonathan Miranda’s patience finally paid off this season, with his discovery of five active Red Siskin nests! Field teams had previously observed nests under construction, which yielded key discoveries about nesting materials, courtship, and competition – but nests with actual chicks had never been seen.  Among Jhonathan’s fascinating discoveries include the fact that male Red Siskins feed chicks, just as females do.