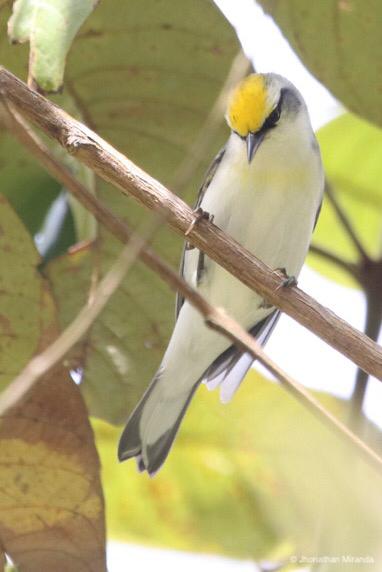 Thanks to support from the American Bird Conservancy (ABC), we have been able to continue our search for the Golden-Winged Warbler (Vermivora chrysoptera) in Venezuela. Between December 2019 and February 2020, when winter migrations occur, field specialists Jhonathan Miranda, Lisandro Morán, and Katiuska González executed field trips in various locations of northwestern Venezuela.

We are happy to report that the 36 days of field effort paid ff: the team detected the Golden-Winged Warbler in three new locations! Even more exciting, during this fieldwork, we discovered two new populations of Red Siskins and sighted around 11 individuals in total. We also found two new species for this region: The Masked Mountain-Tanager (Buthraupis wetmorei, listed as Vulnerable in the IUCN Red List of Species) and Crowned Chat-Tyrant (Ochthoeca frontalis). This discovery of new Red Siskin and Golden-Winged Warbler populations is very encouraging and increases our knowledge of these species while strengthening collaboration between ABC and RSI.